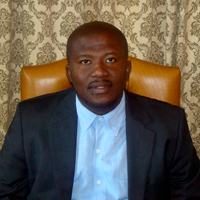 Andrew was born in 1975 in Tladi, Soweto and later relocated with his family to Kuruman in the then Bophuthatswana precinct and now part of the Northern Cape Province. He is undoubtedly one of the young business people in the province with impeccable ambition and drive for achievement. He is responsible for bringing Afri-Devo into this world and has been at the helm of the company throughout its young and promising life.

Before founding Afri-Devo, he gained vast business experience in retailing as a General Manager for Spar in Taung and a vehicle sales consultant for Toyota in Batlharo. He has also been a managing owner of a dining outlet, Loxion Café and a liquor distributor, O.P.’s Bottle Store.

It is this experience, coupled with his pro-active personality and analytical mind that led him to the launch of Afri-Devo at a time of great opportune in the construction and property development market in South Africa. He was personally charged with making or breaking the company’s first three years of full operation between 2005 and 2008, wherein he managed to secure and successfully deliver projects amounting to some R60 million.

Today, he is spearheading the organic growth of what is a thriving company and emerging player of note in the Northern Cape Province and South African construction and property development market, such that he has been anonymously invited to serve on the executive committee of the Northern Cape Master Builders Association (MBA).

He has also recently initiated and successfully sealed a joint venture partnership between Afri-Devo and Covec S.A. for a bulk earthworks contract in one of the new mining establishments in the Northern Cape. This, as he defines it, marks the dawn of a new and very important era for Afri-Devo, one that will also put his personal capacity as a leader to the test, and this is the kind of challenge he endures.